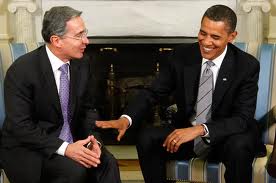 It is a sign of how far perceptions of Colombia have changed that 33 years ago Time Magazine ran a cover with the scurrilous title, “The Colombian connection: billions in pot & coke” stencilled over the psychedelic image of a cannabis leaf.

Today, South America’s third-biggest economy is again in the public eye, albeit for less controversial reasons. Last month, Time ran a full face photograph of president Juan Manuel Santos on its cover with the title: “The Colombian comeback: from nearly failed state to emerging global player.”

In Washington and on Wall Street, the world’s second-most populous Spanish speaking country (after Mexico, but before Spain) is even sometimes referred to as “the new Brazil”.

Few would disagree with Colombia’s description as an emerging power broker. During April’s Summit of the Americas in Cartagena, which gathered more than 30 leaders from around the region, Mr Santos displayed the near-frictionless but nonetheless purposeful diplomatic style he has become known for.

“It is the country that we most see eye-to-eye with on most issues,” is a common refrain heard among western policy makers. Colombia is also the oldest democracy in the hemisphere and, unlike its Latin peers, has never defaulted on a loan.

Nonetheless, many hold a stereotypical view of a country of drug lords and unbridled violence, in the same way England is sometimes stuck in popular perception as a land of drunken lords, cups of tea and bowler hats.

So, to get a sense of how the country has changed from battle ground to bustling investor destination, you can do worse than go to Medellín. An industrial city of 3m people set amid rolling hills with a permanent springlike climate, Colombia’s second city was once known as the world’s murder capital. Drug cartel leaders such as Pablo Escobar held sway, and Medellín’s traditionally can-do but financially conservative business class was hidden by a fog of violence. At its worst in 1990, there were 6,349 homicides, equivalent to 380 deaths per 100,000 people.

Now, multinationals such as Hewlett-Packard have made Medellín their regional base. Local multilatinas such as Grupo Sura are meanwhile expanding aggressively abroad: last year, the financial services group bought Dutch insurer ING’s Latin American pension assets in a $3.7bn deal.

“Medellín is living through its best times since the violence began,” says Carlos Piedrahíta, president of Nutresa, a food company, which also has operations in Mexico, Central America and the US via its Lil’ Dutch Maid brand.

As for violence, while still high, it has dropped to a fifth of what it once was and Pablo Escobar’s grave – he was shot in 1993, fleeing across a rooftop – has become a macabre tourist attraction.

Much of Colombia is enjoying something of a natural high. The shame many felt about their country’s former status as a “nearly failed” state has been replaced by pride.

Crucially, relative peace has allowed the centrist Mr Santos to address development, especially long-overlooked social issues. At his inauguration in August 2010, the 62-year-old president promised to govern “for those who have nothing, and are tired of waiting” – although success has been mixed so far.

The country’s $370bn economy is booming, with output growing at 6 per cent a year. A free trade deal has been closed with the US and foreign investment is rolling in, especially into mining and energy. When Mariano Rajoy, the Spanish prime minister, visited in April with a group of leading Madrid businessmen, he was still smarting from Argentina’s recent nationalisation of oil company YPF. “We don’t expropriate,” Mr Santos said pointedly, laying out Colombia’s difference.

Inflation, at 3.4 per cent, remains within the central bank’s target. With interest rates at 5.25 per cent, the peso has appreciated significantly, partly due to “quantitative easing” in the US. Yet, in contrast to Brazil, there is little talk of “currency wars”.

“Yes, US monetary policy makes life difficult for us, but I’d be more concerned if the US was pursuing contractionary policies,” says Dario Uribe, head of the traditionally orthodox central bank.

Rapid consumer credit growth in a country with historically little financial depth has raised concerns about a credit bubble and over-leverage among the fast growing middle class. But although there is some deterioration of loan portfolios, analysts say there is little chance of blow-up.

“Provisions are very high, banks are well capitalised, and overdue debt is less than in other Latin American countries,” says José Fernando Restrepo, head of research at Interbolsa, a local brokerage.

Mr Santos has also launched a series of modernising initiatives. These include a $100bn infrastructure programme, an ambitious restitution law that seeks to return land confiscated by guerrillas or paramilitary groups, and other reforms designed to improve the tax code, the education system, the judiciary and more besides.

It is a full agenda, which, to some observers, recalls the old saying that the one way to change nothing is to try to change everything.

Indeed, while his government is widely praised for its technocratic professionalism and energy, critics say Mr Santos, who comes from a wealthy newspaper publishing family, has spent the past two years governing “via headlines rather than with the articles”.

“Such criticisms are all about implementation,” says Mr Santos, who says he remains intensely focused on governance and contests the view that his government lacks follow-through.

One sign of that grip is a near 50 per cent rise in tax revenues over the past two years. But such nitty-gritty hardly gets the average Colombian’s pulse racing. A midterm drop in the polls points to three main difficulties Mr Santos faces before presidential elections in 2014.

The first is security. There is a widespread perception it is deteriorating, as guerrillas and disbanded paramilitaries morph into smaller but harder-to-hit criminal gangs that engage not just in drug-running but also extortion and other rackets.

The second is execution. Although Mr Santos’s coalition has virtual control of Congress, initiatives often get bogged down in highly legalistic processes.

The third issue is to ensure in one of the world’s most unequal countries that the poor enjoy the fruits of rapid economic growth. To that end, Mr Santos recently announced fully-funded plans to build 200,000 houses for those most in need. To criticisms it was a populist move, the well-bred Mr Santos shot back: “If helping the poor means being a populist or a traitor to my class, then I am both.”

Colombia may well be an “emerging power”, but it will remain a complex country of contradictions and surprises for a good while yet.